Our drug candidates at a glance

Stroke and heart attack are the most feared complications of pathological changes in the arteries, atherosclerosis. In these cases, blood platelets (thrombocytes) first attach themselves to the damaged vessel wall. They are activated and attract further platelets, sometimes in very large numbers. In this way a clot, a thrombus, forms inside the blood vessel. This can become so large that it directly seals the blood vessel. Some parts of the blood clot can come loose, float away with the bloodstream and close off smaller blood vessels. This means that the area behind the blood vessel is no longer supplied with blood. This is particularly dangerous in the brain and heart – that is where a stroke or heart attack can happen.

Schematic diagram of how platelets attach to a damaged vessel wall in atherosclerosis. If such a plaque tears, blood clots can form, leading to the blockage of blood vessels by a thrombus. Revacept forms a patch for the damaged vessel wall and prevents the formation of a thrombus at the site of the incident. 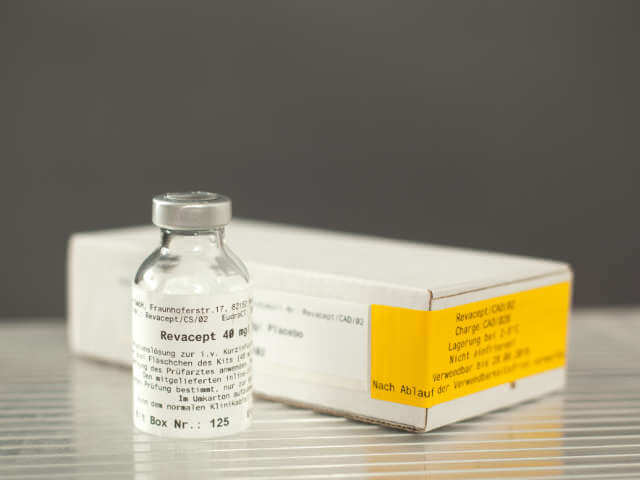 Revacept is a synthetic protein that contains the soluble part of GPVI in one of its two halves, while the other half is formed by the so-called Fc-part of antibodies. There are already many pharmaceuticals containing Fc-fusion proteins.  However, Revacept is the first product of its kind to be used in stroke and heart attack.

With its GPVI part, Revacept binds to damage in arteries, thus covering them and forming a kind of vascular patch. This prevents the formation of thrombi in the arteries. However, unlike all other drugs used to treat stroke and heart attack, Revacept does not increase the risk of bleeding. The general haemostasis remains unaffected – and this is the decisive advantage of Revacept.

Revacept has proven to be very effective in laboratory tests with platelets and in animal experiments. In a Phase I clinical trial with volunteers, it was shown to be very well tolerated at all dosages. It induced a specific and dose-dependent inhibition of aggregation (clumping of platelets) in the blood of the volunteers without any relevant side effects. In particular, general haemostasis was not affected: The bleeding time was not prolonged by Revacept and there were no bleeding complications and no reduction in platelet count (thrombopenia).

The first multi-centre Phase II clinical trial (registered under NCT01645306) in 158 patients showed beneficial effects of Revacept in patients with carotid stenosis. The patients had undergone intervention (surgery or catheter treatment) after minor strokes or transient ischaemic attacks (TIA, a preform of stroke). They were given Revacept before the intervention to prevent complications caused by thrombi, which can cause small strokes during or after the intervention. The protocol of the study has been published (Gröschel et al Thrombosis Heamostasis Open 2020).

Magnetic resonance imaging (DWI-MRI) showed that Revacept significantly reduced the number of new brain infarctions associated with the intervention: In the group treated with 120 milligrams (mg) of Revacept, these infarctions were reduced by 46 percent compared to placebo; in the group treated with 40 mg of Revacept, the reduction was still 10 percent. The patients had an overall clinical benefit with significantly reduced combined endpoints of bleeding and ischaemic complications (“net clinical benefit”). The study is published in Stroke (Uphaus et al, Stroke. 2022;53:00–00. DOI: 10.1161/STROKEAHA.121.037006)

The second study was initiated and led by clinical researchers of the German Centre for Cardiovascular Research (DZHK). This so-called “ISAR-PLASTER” study with 330 patients with stable coronary heart disease was conducted by the teams of Prof. Dr. Adnan Kastrati from the German Heart Centre Munich and Prof. Dr. Steffen Massberg from the Großhadern Clinic of the University of Munich together with medical doctors from other large hospitals in Germany. The study is registered under NCT 03315285 and Eudra-CT 2015-000686). Its protocol is published (Schüpke et al, Thrombosis + Haemostasis 2019; 119:1539-1545).

The data proof that Revacept did not increase bleeding complications or other safety issues. The pharmacodynamic proof of efficacy could be obtained in the blood of the patients in aggregation measurements: despite already maximum conventional therapy Revacept additionally inhibited platelet aggregation specifically. However, the primary endpoint of death or myocardial injury was not reached, possibly because technical problems during stenting such as side branch occlusion cannot be addressed by the local effect of Revacept. The study is published in JAMA Cardiology (Mayer et al JAMA Cardiol. doi:10.1001/jamacardio.2021.0475).

The current status of the development of antiplatelet drugs was summarised in a review in 2019 (Arjun Majithia and Deepak Bhatt, Arterioscler Thromb Vasc Biol. 2019; 39:546-557). In addition to the platelet inhibitors already available in clinical routine, the new developments highlight the advantages of Revacept. This independent review underlines the unique properties of Revacept as a specific thrombosis inhibitor without increased risk of bleeding.

Revacept has been developed together with companion diagnostics to provide early and tailored treatment for patients at high risk of arterial thrombosis. The diagnostics uses the fact that soluble GPVI (sGPVI) is released as an early biomarker of platelet activation. In patients with high sGPVI levels, it is hypothesised that the administration of Revacept can specifically prevent the occurrence of thrombosis without affecting or even reducing bleedings as part of a personalised therapy.

Further developments are already on the horizon. For example, successor products to Revacept could combine its positive properties with additional functions and, for example, dissolve existing vascular constrictions, so-called plaques. Such fusion proteins derived from GPVI-Fc with additional effector functions are currently in preclinical development at advanceCOR.

For example, GPVI-fusion proteins were produced with CD39, an enzyme that inhibits local adenosine diphosphate (ADP) accumulation. In laboratory tests, GPVI-CD39 increases the anti-thrombotic effect compared to pure GPVI inhibition. This has been shown, for example, in experiments in which blood was drained from the carotid artery of patients via damaged blood vessel segments. With GPVI-CD39, a potential successor to Revacept is already in the pipeline.

In addition to Revacept, advanceCOR is developing another approach to inhibit the attachment of platelets to the wall of a blood vessel. While Revacept blocks the GPVI attachment site in the vessel wall and covers it like a patch, the second approach is to block the GPVI itself. To this end, advanceCOR has developed highly specific antibodies in a collaboration with Morphosys AG. Such antibodies can inhibit the function of GPVI.

All pre-clinical trials with these antibodies have been very promising, both in terms of efficacy, safety and tolerability. Laboratory studies have effectively prevented the formation of blood clots in arteries. Similar to Revacept, these antibodies do not lead to a systemic influence on general haemostasis.

Further laboratory experiments with human tissue were carried out by the research group led by Prof. Dr. Wolfgang Siess at the University of Munich Hospital. The researchers allowed human blood to flow over damaged segments of blood vessels that had been surgically removed from patients during their treatment. It was shown that GPVI antibodies inhibit the attachment of platelets to the damaged vessel walls. These results were published in the renowned American Journal of the American College of Cardiology (http://www.sciencedirect.com/¬science/article/¬pii/S0735109715018471). A discussion of these exclusive new developments of advanceCOR can be found in an accompanying editorial by Neal S. Kleiman and Kumaran Kolandaivelu in the same journal (https://www.jacc.org/¬doi/pdf/10.1016/j.jacc.¬2015.03.576).

At advanceCOR we are currently establishing GMP-compliant production of the antibodies in precisely controlled cell lines. This will allow us to carry out the necessary safety and toxicity studies on these antibodies, which will then be used in clinical trials.

Graves’ disease is a severe thyroid disease. It causes the thyroid gland to become overactive: too much thyroid hormone is produced, which disrupts numerous organ functions. Many patients also have an eye disease in which the eyeballs protrude because the tissue behind the eyes grows. Graves’ disease is an autoimmune disease caused by antibodies. They bind to the receptor that regulates the thyroid gland (TSH receptor), which leads to its pathological permanent activation.

The innovative cyclopeptides developed by advanceCOR could lead to new, effective therapies. These ring-shaped peptides with 10 to 25 amino acids are capable to neutralise the harmful antibodies.

Pre-clinical experiments have shown that cyclopeptides can be used to prevent thyroid disease and also eye disease, which is particularly difficult to treat. They were even able to significantly improve the disease that had already occurred.  The very encouraging findings have been published in several scientific articles in high-profile journals:

In further pre-clinical studies, cyclopeptides proved to be well tolerated, even at high doses. They did not trigger any immune reactions and showed a favourable distribution in the body (pharmacokinetics).

Drug authorities such as the German Federal Institute for Drugs and Medical Devices (BfArM) and the European Medicines Agency (EMA) have approved the start of clinical trials in principle. The next step is to produce and bottle the drug according to the internationally valid rules of Good Manufacturing Practice (GMP). With its cyclopeptides, advanceCOR has thus achieved Investigational New Drug (IND) status from the US FDA.